BEDFORD, Mass., June 20, 2019 /PRNewswire/ -- iRobot Corp. (NASDAQ: IRBT), the leader in consumer robots, has announced the addition of the Root coding robot to its product lineup through the acquisition of Root Robotics. With technology initially developed by a founding group within the Wyss Institute at Harvard University, Root is a fun and easy-to-use educational robot that uniquely teaches coding and 21st century problem-solving skills to children as young as four years old. This acquisition supports iRobot's plans to diversify its educational robot product offerings, further demonstrating its commitment to make robotic technology more accessible to educators, students and parents. 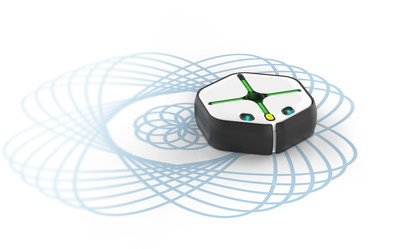 The Root coding robot is a two-wheeled, mobile platform. The robot operates on flat surfaces at home, like tables, floors, and countertops, and vertical surfaces in a classroom, like a magnetic whiteboard. When paired with the companion mobile application, users can instruct Root to draw artwork, scan colors, play music, respond to touch and sound, climb whiteboard walls, and explore the fundamentals of robotics. Root uses three levels of coding language, from simple graphical blocks for young children to full text coding for more advanced users.

"The acquisition of Root Robotics allows iRobot to broaden the impact of its STEM efforts with a commercially available, educational robotic platform already being used by educators, students and parents," said Colin Angle, chairman and CEO of iRobot. "Root also helps increase the reach of iRobot's educational robot line by offering a proven system for people of all ages, including students in elementary school."

"The Root coding robot is an incredibly powerful tool for learning to code because it intuitively scales to users' abilities," said Zee Dubrovsky, co-founder of Root Robotics who will now become general manager of Educational Robots at iRobot. "A four-year-old can begin coding Root using simple pictures and symbols that translate to robot actions. Once a child has mastered graphical coding, they can seamlessly toggle to the next two levels, which introduce hybrid coding, followed by full text coding. This scalable approach is what has been missing from other educational coding robots."

The acquisition of Root Robotics is not expected to contribute materially to iRobot's 2019 financial performance. Financial terms of the transaction were not disclosed.

The Root coding robot is currently available for purchase at https://root.irobot.com for $199 USD. Photos, videos and information can be found at: http://media.irobot.com/.

About iRobot Corp.
iRobot®, the leading global consumer robot company, designs and builds robots that empower people to do more both inside and outside of the home. iRobot® created the home robot cleaning category with the introduction of its Roomba® Robot Vacuum in 2002. Today, iRobot® is a global enterprise that has sold more than 25 million robots worldwide. iRobot's product line, including Roomba® vacuuming robots and the Braava® family of mopping robots, feature proprietary technologies and advanced concepts in cleaning, mapping and navigation. iRobot® engineers are building an ecosystem of robots and technologies to enable the smart home. For more information about iRobot®, please visit www.irobot.com.

For iRobot Investors
Certain statements made in this press release that are not based on historical information are forward-looking statements which are made pursuant to the safe harbor provisions of the Private Securities Litigation Reform Act of 1995. This press release contains express or implied forward-looking statements relating to iRobot Corporation's expectations concerning management's plans, objectives and strategies and the expectations for the financial contributions from the acquisition. These statements are neither promises nor guarantees, but are subject to a variety of risks and uncertainties, many of which are beyond our control, which could cause actual results to differ materially from those contemplated in these forward-looking statements. Existing and prospective investors are cautioned not to place undue reliance on these forward-looking statements, which speak only as of the date hereof. iRobot undertakes no obligation to update or revise the information contained in this press release, whether as a result of new information, future events or circumstances or otherwise. For additional disclosure regarding these and other risks faced by iRobot, see the disclosure contained in our public filings with the Securities and Exchange Commission including, without limitation, our most recent Annual Report on Form 10-K.